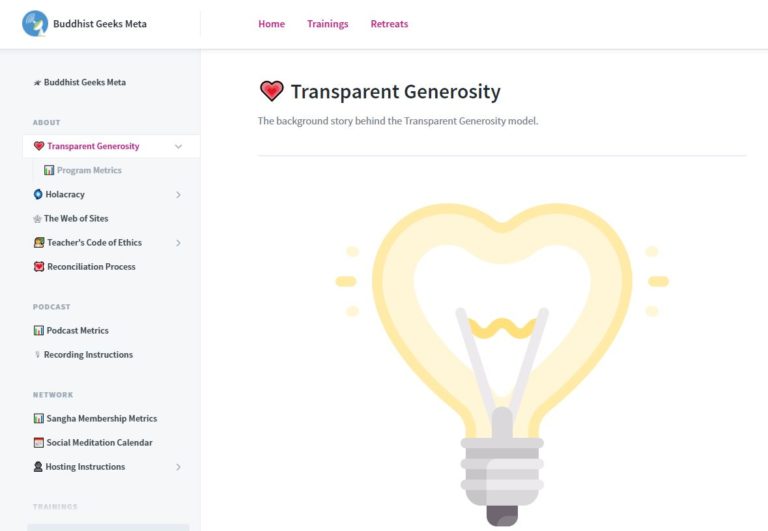 Vince Horn is the founder of Buddhist Geeks, a non-profit focused on promoting meditation, specifically social and out-loud meditation. As Vince related in his annual report video, his program began as a for-profit, which did not work out and was reborn as a not-for profit.

What makes Buddhist Geeks unique, is they do not charge upfront for their content or their experience. Instead, they simply provide recommendations as to the amount they suggest people give to participate in their programs. They also transparently display the average amounts that others have given, as well as the totals they have raised.

The entire methodology is explained on their site, alongside detailed stats and reports from their various programs.

This model has been sustainable for Buddhist Geeks over the last few years since its inception, with participants often contributing more, on average, than the suggested amounts they recommend.

The organization as a whole has seen significant growth as well – in 2019, they raised over $100,000 through their transparent generosity model, while in 2020, these numbers grew to $163,000; a 50% increase in donations raised, and in turn what they’ve been able to offer.

It was Buddhist Geek’s pay-what-you-want model that inspired Prodana, and helps affirm our belief that people may even pay more for an experience when given a chance to choose when and how they give. We then combined it with Vipassana’s pay-it-forward approach to frame people’s contributions in a more communal, global contribution type of frame.

It’s inspiring to note that Vince and his program has seen this level of success considering the fact that they are a relatively small organization without the backing of a fundraising department or a PR and marketing team. It suggests that this type community-powered success is more achievable than we might initially think.

Finally, just as Vince actually segments his individual sub-programs within the overall Buddhist Geeks umbrella, providing fundraising stats and reports for each, Prodana too was built to support individual offerings under one account, so that a practitioner can choose to hone in on specific projects, programs, or methodologies and build communities around each.

It is our hope that more people get inspired by programs like this one, taking a leap of faith about the goodness of humanity.